CEGA gets recognition from Aysen Regional Government for energy research in Patagonia. As an efficient, stable and transparent partner for the development of the region, Aysen Regional Government cataloged CEGA’s work in the development of the project “Estimation and Enhancement of Aysen geothermal potential”. The two-year research quantified Patagonia’s underground energy potential, and the different applications, from electric generation to home heating systems and production processes, to satisfy the industrial needs of the region.

How powerful is the heat buried beneath Patagonia? After a two year research, the Andean Geothermal Center of Excellence, with the support of the regional office of the Ministry of Mining, determined that geothermal energy potential was high enough to install a small plant of energy, from 2 to 5 Mw, which can satisfy regional needs. Although the geothermal potential of the area is infinite, the projections of the study sought to reach outlines aligned with local needs. The local heat is so abundant throughout the territory that it is enough to provide heating alternatives to homes, public buildings and agricultural industry, boosting new ideas to depollute Coyhaique – one of the most polluted cities in Chile- and to create new businesses.

In a special session of the Commission for Science, Technology, and Innovation of Aysen Regional Council, CEGA researchers presented the final results of the project “Estimation and Enhancement of the geothermal potential of Aysen”. The initiative was funded by the Innovation Fund for Competitiveness, (FIC Regional) with a support of US$150 million.

The regional major, Karina Alejandra Acevedo, said: “Geothermal energy allows us to dream with a different region. With this project, we can begin to plan with an energy that was not in our vocabulary, to increase the energy matrix of our region, and generate a step forward.”

The community had a positive reception of the final results, something that was expected, due to the good disposition of the neighbors and public organisms of Coyhaique, Aysén and General Carrera areas, who always lent a hand to the researcher team during the field work, collaborating with data collection.

“CEGA has proven to be an efficient, transparent and loyal ally in the region, and we want to recognize the gratitude we feel for the effort they have made for the development of the area,” said Regional Adviser, Eduardo Vera.

CEGA`s director, Diego Morata, explains that this research in synergy with the community, sets a standard for scientific research with public funds. “This is an example of how the State should act in the country, promoting collaborative work and thinking about the citizens quality of life. Our mission is to say ‘this could be done, these are the data, and this is the way we suggest’, but it is also relevant a political decision to say if this is what they want or not. This has to be only a first step to change the region and work for a real clean and green Patagonia”.

During the results presentation, the Mining Seremi, Ana Valdés, affirmed that: “These are scientists who understand the logic of the public good, have been committed with the citizenship being transparent, publishing and sharing periodically the results of their work, and not just at the end.”

The aims of the project were to estimate the geothermal potential of the region, through the identification and characterization of the different thermal manifestations in the area. As explained by CEGA researcher, Diego Aravena, with these studies in the field, it was possible to determine that on the surface there are thermal sources with temperatures ranging from 30ºC to 85ºC. Moreover, that the minimum depth temperature in the region ranges from 100 ° C to 160 ° C. This is enough heat to think about the design of a small electrical generation plant of 2 to 5 Mw, which according to the conditions of the land, could be located in Puyuhuapi, La Junta or Puerto Cisnes.

“A good thing about this energy source is that it can provide enough energy to the region to boost the local industry, through a technology with very little environment impact. The plants occupy little space. Geothermal is the renewable energy that lesser surface requires, and can be operative all year, independent of the climate” says CEGA´s director, Diego Morata.

Diego Aravena adds: “Our research gives geothermal solutions also to areas of the region that do not have hot water in depth, such as Coyhaique. The capital of the region has water in depth that is at 10ºC, and whose temperature remains constant 80 centimeters underground, all year round. That is an interesting fact if we consider that in the surface, during a day in Coyhaique, the ambient temperature can fluctuate from 0ºC to 26ºC degrees. That determines ideal conditions for implementing geothermal heat pump technology for heating, which uses the ground as a source of heat to air-space and to produce hot water. This technology does not pollute and its operation cost is much more profitable than pellet or gas.”

During the execution of the FIC project, CEGA’s research team, inspired by the interest of the community to test the feasibility of geothermal in the region, postulated to get funds to build pilot experiences of geothermal direct use. CEGA was one of the winning proposals of the Energy Access Fund 2016 (FAE), competition organized by the Ministry of Energy (Chile), to build a geothermal heating system in a greenhouse  at the Work-Study Center “Valle Verde” (CET), a Gendarmerie institution that receives special prisioners in order to prepare them  for labour reinsertion. The project, which will be ready in 2017, will produce vegetables in winter, a situation that until now was only possible with polluting energy.

Besides this, together with the Energy Centre (CER) from the Faculty of Physical and Mathematical Sciences of the University of Chile, a United Nations Environment Programme funds was awarded for the construction of a geothermal firewood dryer and a greenhouse.

These projects will make tangible one of the main proposals of “Estimation and Enhancement of the geothermal potential of Aysen.”, which is a map of the region where the geothermal uses are indicated for area, according to the water and soil characteristics. In short, proposals that start from the public concern, supported by science and the state, for improving the community quality of life. 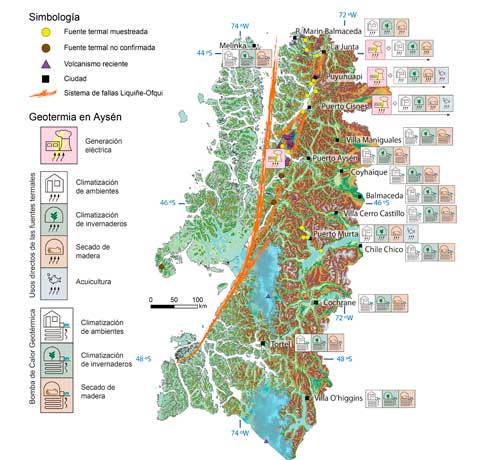