Geothermal Direct Use: The experience of a house in Pirque

Seeking to incorporate renewable energy into everyday life, a family decided to use Earth’s temperature to heat rooms and spaces in their new home.

Alonso Yáñez is a radiologist and, two years ago, he moved to a new house with his family, in Santa Rita de Pirque, 40 km from the center of Santiago. In his new home, he proposed to reduce CO2 emissions and incorporate clean energies, such as geothermal, to heat about 240 m2.

It was not simple to start this sustainable housing project. Alonso spend many hours on Internet and had to find an expert for calculate, according to house`s area and characteristics, how much energy they would need to heat the spaces at different times of the year.

“The study compared paraffin with gas-condensate, firewood and geothermal energy. From the beginning we discard the wood because we did not want to pollute. We were also not interested in using paraffin, so although gas and geothermal were very similar, in the long term geothermal was more convinient, “explains the homeowner.

The geothermal system was installed by the Chilean Company VOHER. Jorge Villarroel, VOHER`s country manager, says that it was not necessary to make a deep well. For this type of house, the most convenient option was to use geothermal collectors, installed 2 meters underground: “It is known as uptake horizontal and is a system of high density polyethylene pipes (HDPE) through which a fluid circulates, capturing heat of the Earth. This system is connected to a heat pump that compress the fluid and increases the temperature of a gas. This gas transfer the heat to the water that circulates through the radiators inside the house”. 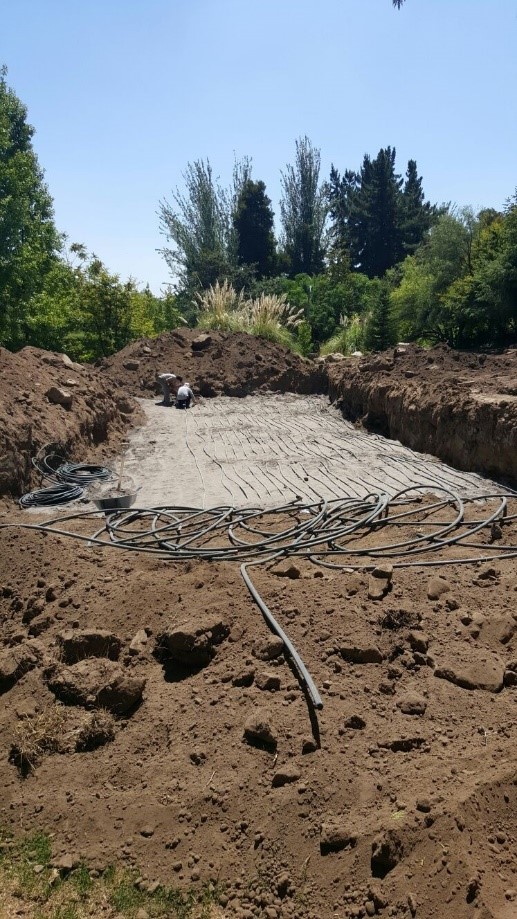 In addition to being a green energy, VOHER highlights the high-efficiency of this technology. One of the benefits, explains Villarroel, is that its COP (coefficient of performance) is higher than 4, which indicates that for each electric watt consumed by the heat pump, we get 4 thermal watt: The COP is the systems efficiency, and is defined between the heat provided and the energy consumption of equipment. The rest of the energy that is needed to heating the house, comes from the Earth. He adds that, despite the benefits, this technology is still unknown in Chile: “The almost null presence of local industry dedicated to making heat pumps, has increased costs and put a stop to its massification”.

After spending the first winter with the system, Alonso`s family makes a good evaluation. They keep the heating on all the time, every day of the year, even to produce hot water. Compared to a gas system with the same level of comfort, the investment made recovers in an average of 5 to 6 years: “It has been very comfortable. In addition to not contaminate, in economic terms our electricity consumption did not exceed the 140 USD, which is less than what our neighbors spend . For example, many people use gas-condensate, which means that in the winter months you can easily pay a bill of 600 USD. This means that in many cases, despite having the whole system at home, people end up using firewood to temper spaces, with all the damaging that this can be for the environment”.